In the fall of 1984, my friend Scott lead me down the long, dark road I am on now when he introduced me to Dungeons & Dragons the day after my 10th birthday. At that time, TSR had "For ages 10+" on the covers of their materials... and for some reason, we adhered to that.

Starting in Basic and quickly moving my way through the ranks until finally getting to Advanced, I was hooked. I created characters based on movies I had watched. The Conan archetype was the first attempt, but wouldn't be my last. Here's some of the cast of TV and movie characters I remember making RPG characters for: [Mind you, this list is based on characters over the course of years and not just from D&D.]
The 80's also brought me visions of my first love: Tiamat. That probably sounds real wierd, but I've had a horrible appreciation for the 5-headed chromatic dragon since I first laid eyes upon her animated version in the Dungeons & Dragons cartoon. To this very day, Tiamat is close to my heart. Her's was the only D&D mini that I saved when I sold my collection and I have this printed signed and on the wall in my living room: 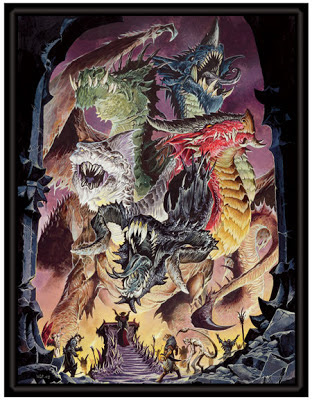