Comics & RPG's: A Mingling of Interests

About my sophomore year in high school, I had decided I wanted to become a writer. My primary influence at the time was the writings of Stephen King. I was hooked on his stories, and it was then that I was reading "IT" which set my imagination ablaze.

My sophomore English teacher adamantly despised King and insisted that his work was an affront to literature. I always felt that he didn't like me that much, since I always brought copy of "IT" to class. In my way of biting my thumb at him, I decided to chose King as the subject of my final paper for that class. I wrote an extensive biography citing references and everything. This was in the days before the World Wide Web and the abundance of information at your fingertips... I had to do some serious research through books and magazines. I remember spending house going through the computerized microfiche system at the public library to find articles written on King. Got a B... think I may have been screwed on the grade, but I accept it.

My junior year in high school, they offered a "Creative Writing" class. I jumped on-board, and then I learned who was teaching the class; the very same teach I dealt with my sophomore year. Our attitudes hadn't changed much and we butted heads a couple of times over my writing style and appreciation of the genre of horror and Stephen King. I received a B in the class that I actually felt I deserved. This made me want to become a published writer. I had a spiral notebook that I wrote outlines for so many different stories. I had pages of name combinations for characters. I even wanted to legally change my name when I was of age. It would have been Richard Baughman, in honor of King's pseudonym of Richard Bachman. Thinking back now, I'm glad I didn't make the change.

During my high school years, I continued to collect comic books and play role playing games. I never thought about merging my interests until my senior year in high school when I started to collaborate with my best friend and artist.

We had first met when he came to my high school my junior year. He played the french horn, where I played the baritone saxophone. We found common interests in role playing games and music. Later, he would open my mind up to anime and a different genre of comic books that I may have never noticed without his help.

On a casual phone call near the end of my senior year, the idea came about to create our own comic book. We each developed our own characters for the comic and even created them as RPG characters in Palladium's "Heroes Unlimited" game setting. They were Starshadow and Raven, collectively known as "The Shadows of Justice".

We played the characters in our previous Heroes Unlimited game that incorporated several different aspects of the Palladium multi-verse. They fit in just fine and we were able to better develop their personalities. Through the game, we tackled a few of the plot points that we had designed for the comic book as a series. I spent many hours working to write the script for the first issue and create an outline for the first 6 issues. In the end, we were able to put together a decent proposal that we sent to Dark Horse Comics. We chose Dark Horse because they're local to us (relatively) and the submitting editor was very receptive and helpful on our requests for information. (Remember, this was all before the WWW and we had to either call or send snail-mail to communicate.)

Here are the pages that were actually finished for our submission: 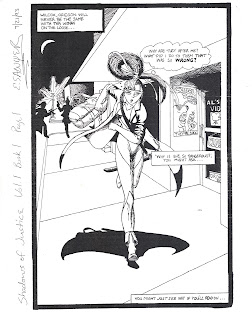 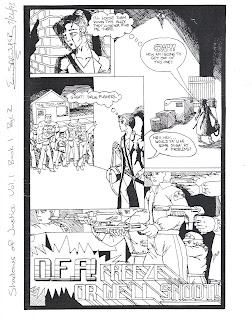 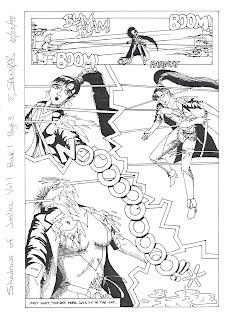 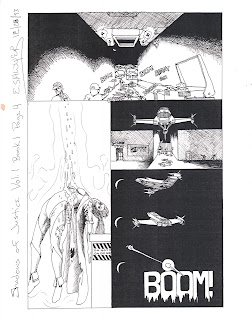 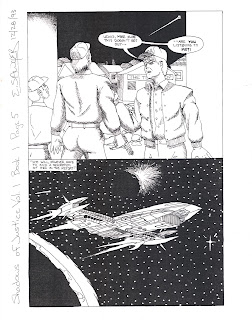 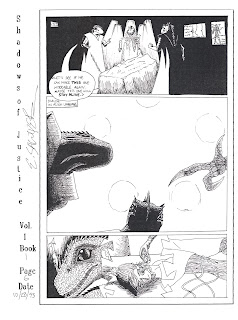 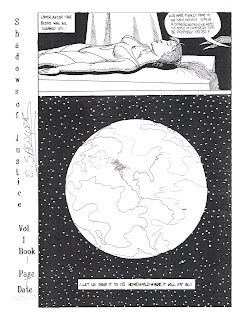 For those of you who understand comics and the industry, you can obviously tell that we didn't have Blue Line pages to actually put the sequential work in the industry format. The last 2 pages were drawn on a template that I had created. Unfortunately, our ideas were not accepted by Dark Horse... but they did provide some good feedback. My next attempt to get into comics as a writer wouldn't be for many years.

Before Jim Butcher published his character of Harry Dresden, I came up with my own version named Jonathan Spectre. This idea was based off of a human medium with some magic (Numina) in the World of Darkness. He even had a "sidekick" (of sorts) in the form of a wraith named Mimic. I had supporting characters outlined, a fictional town designed, a house where Jonathan would work out of, and an outline of about 7-8 stories. I even approached an artist (who I can't remember their name any more) to bring my characters to life. Here are the resulting pictures: 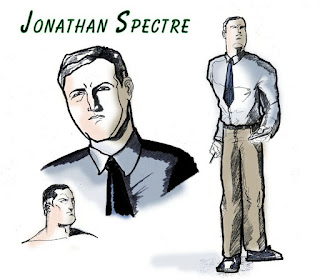 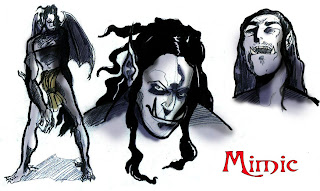 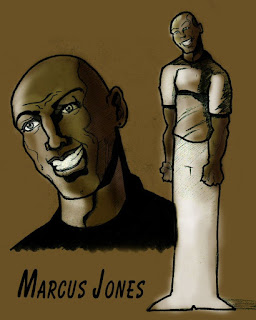 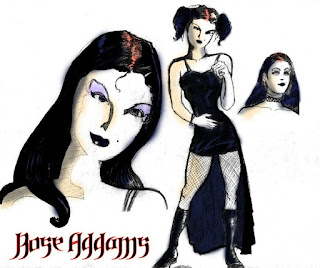 Unfortunately, I found that I had no real follow-through and never really progressed beyond this stage. If Dresden had not been published, I might have gone back to develop this idea.

All these characters, except for Marcus Jones, was originally a character of mine based in White Wolf's World of Darkness. As mentioned before, Jonathan was a hedge magician. Mimic was actually a Spectre based out of Wraith: The Oblivion. Rose was a Hollow One from Mage: The Ascension.

As much as I would have liked to bring my love of comics and RPG's together to break into the industry, it never seemed to be in the cards. What I think I'd like people to take away from this is that comics can be a great resource for ideas in your games, and likewise characters in your games can be a valuable inspiration for a comic book.

Just as a side note, I also write another blog specifically about comics books called Zanziber's Point of View. If you're interested, I'm going to write about my experiences of being a comic book inker. (Yes, mock me with your taunts from Chaising Amy all you want. I'm comfortable with what I do.)