The Games We Play: Multiple Venues/Genres

In the 80's, Palladium brought us a system with multiple universes (known as the multiverse), but they weren't actually connected. Then, in 1990, there was Rifts. This single game helped to bridge all the universes in the Palladium system under one big cosmological  convergence. Seasoned role players know Rifts well and there are many different viewpoints on it being a good thing or not. I for one am thankful for the invention of Rifts so that we could bring together concepts from different games together.

For instance... in the 90's, my group of friends and I were avid players of the Palladium system and began to utilize Rifts as a way to bring together our favorite aspects from other games. We brought together elements from Robotech, Beyond the Supernatural, Heroes Unlimited, Teenage Mutant Ninja Turtles, Rifts and Ninjas and Superspies into a single world under the banner of being heroes, researchers and inventors. This was our sandbox, and it was fun.

One of the biggest inventions that came from this sandbox was called the "Omega". It was a mashup between standard mecha and the Invid Royal Command Battloid. This was meant so that even "normal" humans could utilize it. I happen to have an artist rendering by the player who developed the actual idea behind it. 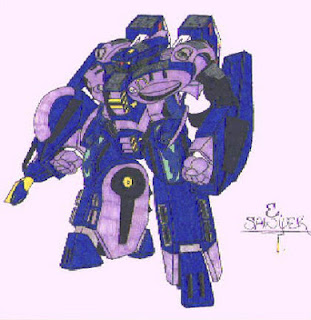 In the 90's, White Wolf published... what is now know as... the classic/old World of Darkness. Vampire, Mage, Werewolf, Changeling and Wraith comprised the core of this new world, and as I was a long-time fan of the supernatural, of course these games became quick additions to my collection and our playgroup.

The great part of the World of Darkness is that you can play each game separately, or combine them together for the rich feel that Mark Rein·Hagen and the other developers had in mind. As much as they can be played separately, I feel that they are better combined. This is something that has been lost on the powers-that-be who develop the live action rules for the Mind's Eye Society, who seem to prefer to keep each game separate.

Sure, Dungeons & Dragons has their different settings such as Dragonlance, Forgotten Realms, Dark Sun, Ravenloft and so on. I never felt that inter-setting travel was not something that TSR and WotC had in mind... even though they do have inter-planar travel. I know there have been some DM's (myself included) that allowed for the inter-setting travel. This just helps to promote the rule of all RPG's that the no matter what the rules in the books state, the DM/GM/ST has final determination in their games.
Posted by John "Zanziber" Rogers at 1:38 PM