If there were a book about the history of role playing games (which there may be and I have not yet read it), it would undoubtedly reference Dungeons & Dragons as the first published RPG system. This is where I first cut my teeth in role playing. My first characters were based on the rules from the original "Red Box".

The rules evolved through many incarnations: Expert, Master, Immortals, Advanced, 2nd Edition, 3/3.5 Edition and 4th edition. From this spawned Pathfinder... but that will be for another posting. Where D&D originated from TSR, it is now owned by Wizards of the Coast, which is owned by Hasbro.

In the beginning, the armor class system worked much differently than what we use in today's incarnations of Dungeons & Dragons. There was a score called Thac0, which stands for "To Hit Armor Class 0". There was even an easy to use dial to help you understand Thac0:

To some people, Thac0 was a confusing trait. When you know your Thac0, you can calculate what you need to hit any armor class by adding or subtracting from that number. In those days, armor class started at 10 and worked it's way down rather than the higher your armor class the better. If you Thac0 is 17, then you would need a 13 to hit a creature with an armor class of 4 and you would need a 20 to hit armor class -3.

There also wasn't all the classes, feats and skills that 3rd edition introduced. Did this make earlier incarnations of D&D harder to play? Not to me. I feel that the addition of feats and skills do help to improve the game, but I have also seen where feats also hinder players when they are unfamiliar with how exactly the feats they choose work.

I don't remember D&D going overboard on the number of books they published until around 2nd edition. This is also when I decided I wasn't going to play as much and didn't buy the books. I believe it was at this time when a budding Wizards of the Coast began to influence the game. After Wizards purchased TSR, the books just seemed to keep rolling-out. This became all too evident when the officially released 3rd edition. The number of books that were published were just exorbitant. When my interest was drawn into 3/3.5 D&D, I too was sucked-in and purchased the books as they became available. Thank goodness I was working at a bookstore and received a discount.

Even though I didn't play all that often, I continued to purchase the new books until I left my position at the bookstore. The good thing about having all these books was that many of them kept their value, and a few even increased in value. When I sold my collection of 3/3.5 Dungeons & Dragons book, I started with the books I could live without. I kept the core books plus the primary settings materials and sold the rest. That got me through several months of being unemployed. A few years later, in another bought of unemployment, I would sell the rest of these books.

While I was working at the bookstore, I collected a set of the AD&D hardback books: Players Handbook, Dungeon Masters Guide, Monster Manual 1 & 2, Fiend Folio, Legend & Lore, Greyhawk Adventures, Dragon Lance Adventures, Manual of the Planes, Unearthed Arcana, Oriental Adventures, Dungeoneer's Survival Guide, Wilderness Survival Guide & even the Forgotten Realms Adventures boxed set. I also have a large collection of maps from various adventures, magazines, boxed sets and other places to use for just about any type of adventure. I don't pull these items out, but they make a great addition to my collection and it reminds me of my RPG roots. If I ever find a group of players who will run or play Advanced Dungeons & Dragons, I'll be ready.

When TSR first released their tome of God's, it was names Deities & Demigods. I remember checking this book out from my local library on several occasions. I think this book was what originally inspired me to research religions. 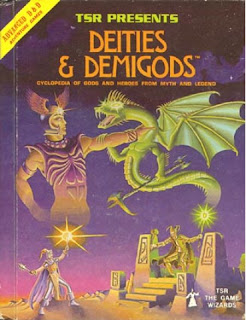 The first printing of Deities & Demigods included the mythoi of Cthulhu and Melnibone.  The ideas behind the Cthulhu mythos were in the public domain at that time, but copyright on the Cthulhu books in print was owned by Arkham House, who had licensed Chaosium to create a Cthulhu RPG based on those books.  TSR thought the public domain status allowed them to create game representations of whatever Cthulhu creatures they desired, and so that mythos was added to Deities & Demigods.  TSR then contacted Michael Moorcock, who gave permission for TSR to include the Melnibonean mythos in Deities & Demigods. However, again, Chaosium had already arranged for a license to create an Elric RPG.

Chaosium became upset that TSR was apparently violating Chaosium's licenses, and the print run of Deities & Demigods was halted while the two companies sat down to talk.  Eventually, they agreed that TSR could continue printing the books with the two mythoi as is, on the condition that a note be added to the preface: 'Special thanks are also given to Chaosium, Inc. for permission to use the material found in the Cthulhu Mythos and the Melnibonean Mythos.'  The printing plates were changed, and the first printing continued.

When the time for a second printing came, the Blume brothers decided that a TSR book should not contain such a prominent reference to one of their competitors. They decided to remove the two mythoi, and thus the need for the note.

Legends & Lore has identical contents to Deities & Demigods; the cover artwork was updated in-line with the other 1983 AD&D manuals, and the title was changed to avoid potential conflicts with fundamentalist Christian groups. When I first started working at the bookstore, I found that there were several people listing the "Cthulhu" 1st edition of Deities & Demigods under the 3rd edition ISBN on Half.com. Most of the prices for these books on Half were not even close to what the actual book was selling for on eBay and to collectors. Like the Capitalist I am, I bought as many of these as I could and flipped them for a nice profit. I saved 1 copy for as long as I could. When unemployment hit, my last copy with "Cthulhu" was sold.

I was fortunate that my parent's were supportive of my growing imagination. I'm not sure when it was, but I do remember that my first D&D book was Fiend Folio given to me on Christmas. 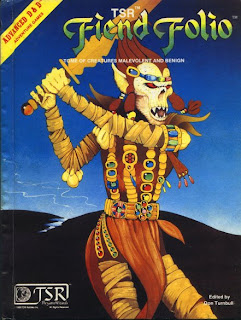 The good thing was that it was a book that none of my other friends ever had. The bad thing was that I remember not really caring for any of the monsters it contained. I hardly used it until I was in high school and I began to appreciate a few of the creatures contained within its pages.
Posted by John "Zanziber" Rogers at 8:57 AM