As I've stated before, I've been role playing since I was 10 years old. Through all those years, I have accumulated a large collection of dice. I think all of us who have spent a number of years as a gamer have. Some of you may have even used a Crown Royal bag to carry your dice... I know I have at least once.

The other day, during the Pathfinder game that I'm currently playing, one of the players started sorting through her dice. She was sorting through them to make sure she wasn't missing any as her cat had knocked them over at home earlier. I watched as this process made its way through 2 additional players, and I got the itch to organize my collection at home. 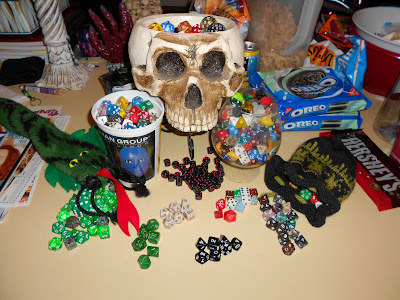 This is how my dice collection was originally organized: 2 dice bags, a Blue Man Group coin bucket from Las Vegas, a brandy snifter and a Halloween candy skull. I currently have them in 5 separate 32oz World of Warcraft AM/PM plastic cups (previously unused) that I received when I attended Wizard World Portland in 2013.


Here are the components of the collection:


When I was working as a buyer for a used book store, one of my specialties was RPG's (go figure). Occasionally, a collection would come in where the seller wanted to get rid of everything, including the dice. I was more than happy to assimilate them into my own collection.

Several years ago, when I actively held games at my home, I had a friend who would go through my entire collection and organize them by the few actual sets I had. After that was done, he would occasionally suggest that a few dice were his or that perhaps some of his dice were actually mine. I never minded this ritual as the few actual sets of dice that I have I try to keep out of the main collection.

When I was in middle school, I had a friend who wanted to develop an Asian themed game with the system being totally devoted to the d100. I don't mean d%, I mean the actual d100 die (as pictured in "The Oddball's", there are 2 still in my collection) and nothing else. I didn't know what he was actually intending when he asked me to develop stats for weapons. I used my common sense and gave damage rating consistent with the weapons. (i.e. d6 for a dagger, d10 or 12 for a katana.) When I showed them to him, he informed me that he wanted EVERYTHING based on the d100. That's when I stopped working with him.

Also in middle school, I started learning to play Champions. That is when I cannibalized every board game I could find for 6-sided dice. Yahtzee, Monopoly, Clue, Risk. I don't think I ever gave those games back their dice. Years later, I would find my first "DM Slayer" in a National Geographic board game. As you can tell in the d12 photo, I still have that die.

I also remember when I purchased my first d100. It was $5 and I bought it at the only game store we had in town. I don't know that I ever really used it all that much and it's no longer in my collection. I think I was the only one in my gaming group that ever owned a d100 for many years.

I know that Gygax Magazine has been posting images of dice collections people have sent to them via Facebook or Twitter. I hope that they'll post my pics and I look forward to seeing yours as well.
Posted by John "Zanziber" Rogers at 8:39 AM