The Systems We Play: Star Wars vs. Star Trek

There have been several RPG incarnations of both of these sci-fi classic franchises - from traditional pen-and-paper RPG's to various dice variations, card and miniature games. I'd like to break down each version and give some opinions on what I'm familiar with. 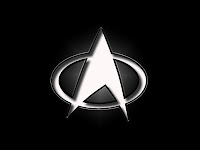 FASA (1982-1989):
The game system was percentile based, meaning that for every action or test desired, players had to roll two ten-sided dice to generate a random number from 1 to 100. Success or failure was determined either by rolling against a set difficulty target, or a player's own skill, or a hybrid of both, adjusted by circumstances.

For example, assuming no modifiers, if a player had a skill of 45 and rolled 33, the character was assumed to have been successful in that action. If there were tools for the task available, the player might have a bonus of +25; if the task is made more difficult because of conditions (such as a space battle) the player might have a penalty of -25.

FASA had previously written supplements for GDW's Traveller, an association which influenced the early structure of the Star Trek game, particularly in character generation.

Each planet in the game's atlas had a code that - coupled with the character's merchant skill and some luck - allowed players to buy and trade across the galaxy. A ship's carrying capacity was not based on tonnage, but on volume (i.e. how much space a ship can hold). There were also rules on buying and selling stock on the Federation stock market.

Zanziber Sez: I barely remember playing this in my youth, though I have most of the books for this now. It takes me back to an earlier age when games came in simple boxed sets and the Cold War was on. It's an interesting system. My only negative thought is that you're stuck in the universe of the original series. (Yes, I prefer Next Generation and beyond over the original series. I'm a sucker for good writing, acting and effects.)

Last Unicorn Games (1998-2001):
Due to licensing issues, LUG did not release the game as a single core rulebook and setting supplements for the various series, but instead intended to release a core book for every series. The Star Trek license was lost to Decipher before a Star Trek: Voyager rulebook could be released.

Last Unicorn Games was one of the first role playing companies to utilize the concept of releasing additional pages for published books via the web. LUG dubbed these "Icon Links," in reference to their overall "Icon System" game mechanics (the term Web Enhancement hadn't been invented yet). Unlike current web enhancements, which are simply additions that can be added to the end of a book, LUG took a unique approach, by planning the enhancements ahead of time, and printing a small Icon symbol at various points in a given book, informing the reader that additional material on the subject-at-hand was available on the company's website to read or download and print. These enhancements are now being stored online, and can be downloaded from Memory Icon, under the Icon Links section.

Many additional books and supplements were planned, and quite a few had various chapters already written, in varying degrees of completion. LUG's former writing pool has been extremely generous and supportive of the fan-movement to keep the game alive and expand on it. In support of this, much of the unpublished material has been released for the fans.

Zanziber Sez: Since Last Unicorn came in during the Next Generation, I appreciated this version. I think that this is my favorite of the 3, I just wish they had kept it up in order to include later material. I guess I can't have everything.

Decipher (2002-2007):
When Decipher acquired the rights to create the RPG, they also acquired most of the gaming studio from Last Unicorn Games. However, the Decipher game system is dissimilar to the one that Last Unicorn published. Instead, the system is similar to Wizards of the Coast's d20 System but uses 2D6 to resolve actions.

The CODA System is a role-playing game system designed by Decipher for Star Trek Role-playing Game. It uses six-sided dice, and a standard set of character statistics, as well as skills and edges (which are similar in function to the d20 System 'Feats'). Characters belong to a class, and can adopt more than one class as they progress.

The CODA System terms character leveling advancing and refers to characters as having N advancements rather than being of a particular level. Advancing gives the player a number of picks with which to buy upgrades to their character's statistics and abilities.

Zanziber Sez: I never actually played in this system because I was thoroughly entrenched in D20 and White Wolf's classic World of Darkness. I appreciate that they were able to bring in the additional settings, but the 2d6 system bothers me a bit. I'm just glad that Decipher made the Star Trek CCG.

West-End Games (1987-1999):
Characters in the D6 System are defined by attributes and skills. Attributes represent the raw ability of a character in a certain area. Most D6 System games utilize anywhere from six to eight attributes, though these can vary greatly in number and name by the game in question. Acumen, Intellect, Knowledge, Perception, Presence and Technical are examples of mental attributes; Agility, Coordination, Mechanical, Physique, Reflexes and Strength are examples of physical ones. Skills are the trained abilities of the character and are associated with a specific attribute (e.g., driving, acrobatics, and climbing might be skills based on the Reflexes attribute). Each attribute and the skills under it are rated in values of Dice and Pips; Dice equal the number of dice rolled and Pips equal a one or two point bonus added to the roll to determine the result. The more dice and pips in the rating the better the character is at that skill or attribute. A character with a Strength rating of 4D+2 is stronger than a character with a Strength rating of 3D+1, for example.

Zanziber Sez: Even though this system might be considered "difficult" to people who are relatively new to role playing now, this was fun. I may have a biased point of view due to Star Wars being some of my favorite movies of all time (pre-prequel). The fact that this was the first time I could interact with the setting I enjoyed when I was younger really speaks to me. This system helped to introduce the fiction beyond the movies to me. This is when I began reading Timothy Zahn. (I should really get those books in my collection again.)

Wizards of the Coast (2000-2010):
The Star Wars Roleplaying Game is a d20 System role playing game set in the Star Wars universe. In 2007, Wizards released the Saga Edition of the game, which made major changes in an effort to streamline the rules system.

The game covers three major eras coinciding with major events in the Star Wars universe, namely the Rise of the Empire, the Galactic Civil War, and the time of the New Jedi Order.

The Star Wars Roleplaying Game originally came out around the time of the release of Star Wars Episode I: The Phantom Menace. It included statistics for many of the major characters of that movie. The later Revised game included material from Attack of the Clones and changed various feats and classes.

The Star Wars Roleplaying Game uses a Vitality/Wound point system instead of standard hit points, dividing damage into superficial harm (Vitality) and serious injury (Wounds). A character gains Vitality points just like hit points in other d20 games, and rolls for them each level and adds their Constitution bonus. A character's Wound points are equal to their Constitution score.

Most game mechanics are familiar to players of Dungeons & Dragons and other d20-based games. Characters have six ability scores, a class and level, feats, and skills. Most actions are resolved by rolling a twenty-sided die and adding a modifier; if the result equals or exceeds the difficulty, the check succeeds.

Zanziber Sez: Much like with Last Unicorn Games version of Star Trek, I have a great fondness for the d20 based system for Star Wars. By the Saga Edition, we had sourcebooks covering all the movies and much of the extended universe. I was sad when I noticed Wizards not publishing any additional material.

Fantasy Flight Games (2012-current):
In August 2011 Fantasy Flight Games acquired the Star Wars license from Lucasfilm Ltd. and announced two Star Wars gaming products: the miniatures game X-Wing and the card game Star Wars: The Card Game.A role-playing game was rumored to be in the works but only a whole year later, in August 2012, the editor announced the publication of Star Wars: Edge of the Empire, the first standalone game of a whole of three, constituting the Fantasy Flight Games Star Wars role-playing game. The second installment, Star Wars: Age of Rebellion, conceived for playing rebels against the Empire, and the third one, Star Wars: Force and Destiny, conceived for playing Jedi characters, are not yet published.

Zanziber Sez:I haven't had the opportunity to play in this system yet. When I first saw the miniature game, I was enthralled. The only thing keeping me from getting into the miniatures game is the fact that it is too expensive. I'm looking forward to giving the RPG and possibly the card game a try; But until I either win the lottery or Fantasy Flight lowers the price of the mini's, I won't touch them.

In 1994, Decipher brought us Star Trek Customizable Card Game. This game instantly drew me in and kept me entertained for several years. When they ultimately stopped publishing new material, a group called The Continuing Committee took over... unofficially. They continue to support tournaments and still generate virtual sets of cards that can be printed for use.

From 1995 to 2001, Decipher also published Star Wars: Customizable Card Game. When Decipher lost the license, Wizard of the Coast developed their own version. For the Decipher edition, again a group was formed to continue to support the fanbase with tournaments and virtual sets. They are called the Star Wars Customizable Card Game Players Committee.

In 2002, Wizards of the Coast started publishing Star Wars: The Trading Card Game with a different style and feel from the original Decipher games. This was shelved in 2005. They also began to produce Star Wars Miniatures to coincide with the Dungeons & Dragons Miniatures game.

In 2011, Fantasy Flight Games picked-up the license to publish Star Wars: The Card Game and X-Wing.

Zanziber Sez: I loved the CCG's by Decipher. I bought and sold my original collections, but a few years ago I started collecting again. I now have large collections of each game... but I have no one to play and no time to play.

I never played the Wizards games and have yet to play the Fantasy Flight version.

I know I didn't touch either Young Jedi or Jedi Knights, which were also produced by Decipher. They never had the same popularity as the other CCG's Decipher published.
Posted by John "Zanziber" Rogers at 8:50 AM