I've been on a bit of a writing hiatus, but this week I started thinking about a new series of articles I thought I could write for RPG4EVR. Being a person with a very open mind, and a long-time fan of the Marvel comic book "What if..." series, I decided that this would be an interesting direction to go. Please enjoy the inaugural post of my "What if..." series.

We all know the story well. A group of sentient, alien robots leave their dieing planet in search of a new home and they happen to find Earth. Those who grew-up in the 80's... like myself... remember the cartoon and comic books. I'm sure that few of the "younger" generations even knew that there was already a Transformers movie well before Michael Bay came along. 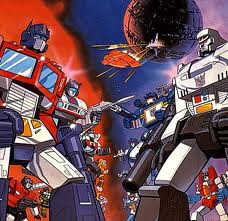 While I must admit that I was never a huge fan, I did enjoy the cartoon series and I read some of the comics... mainly the crossovers with G.I. Joe. I even had some of the toys when I was younger. Like most kids of that era, they were played with until they were falling apart or destroyed as casualties of war involving firecrackers.

These day's, there are more people who know the Transformers only from Michael Bay's movies. For those people, I lament that they don't have a rich and full understanding of the actual Transformers. Sure, the cartoon and comics were specifically designed to help sell the toys, but I'm sure that the toys and subsequent rise in popularity from the movies didn't hurt Hasbro. 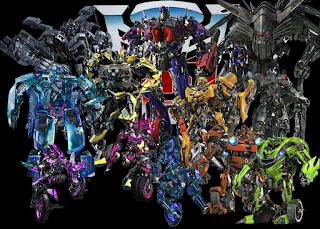 In 1990, the role playing community was introduced to the first real multi-genre RPG, Rifts. This game made it possible to bring aspects of all the other Palladium games under a single umbrella. In the base setting, you have your fantasy and sci-fi elements all in one. From dragons to aliens and everything in between, Rifts made so much possible. I think it also opened a Pandora's box.

Now, try to imagine the aforementioned sentient, alien robots landing not in 1980's America, but rather the Earth of Rifts with those previously mentioned dragons and aliens. The Autobots landing in North America. Would they side with the Coalition? How would their presence change the landscape of Rifts? Would the Decepticons ally themselves with creatures like the Splugorth? 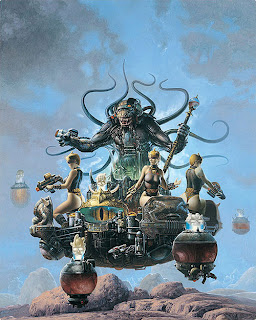 Maybe the original Megatron was the concept basis for Glitterboy armor. Could you imagine Spike (from the cartoon) or Sam (from the Bay movies) wearing something like this: 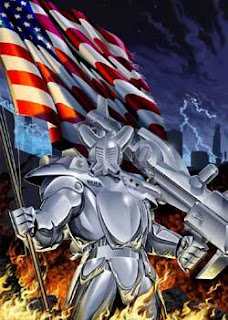 I wonder if the Decepticons would find a way to convert the magical energies from leylines into energon. 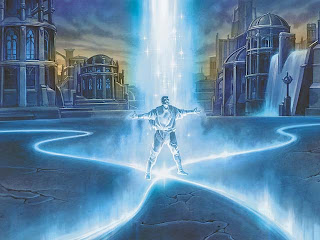 I invite my readers to post their comments on how they would see this "What if..." played out. Since there isn't a currently licensed Transformers RPG, how would you attempt to run this type of setting?

I would also like to invite readers to post their own "What if..." questions that they'd like to see posted about.
Posted by John "Zanziber" Rogers at 10:42 AM

Email ThisBlogThis!Share to TwitterShare to FacebookShare to Pinterest
Labels: What if...