As of right now, I am no longer a member of the Mind's Eye Society. I have allowed my membership to lapse and began to focus on other things in life for a few reasons that I feel I can now express without fear of retaliation:
I'll miss the good times and the enjoyable storylines. Many of the people I want to keep in touch with are connected with me via Facebook. I'm sorry that the Salem Domain's ship had to sink one final time. 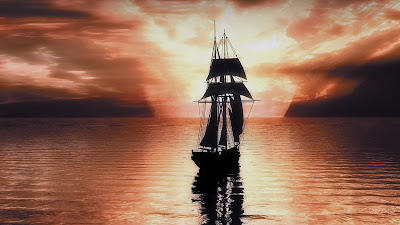 Posted by John "Zanziber" Rogers at 6:00 AM No comments:

I know there are so many different systems that have various methods of generating characters. Since I originally was brought into RPG's using Dungeons & Dragons, I've always been accustomed to a 4d6 method of generating your characters attributes. For those who don't know what I'm talking about, you roll 4d6, remove the lowest single result, and that's your stat score. (i.e. 4d6 rolls 4, 5, 6 & 2 so your total would be 15.) When I joined the Pathfinder game I'm currently in, I was finally introduced to a point-buy system of stat generation.

I recently found a post entitled The Ultimate Question – Roll or Point Buy? and it got me thinking. While I understand the fairness of a point buy to all players, I feel that this doesn't allow for much creativity for the players. In the day's of Gygax, Perren & Arneson, dice were the method of character creation. Why change? For some people, it make character creation a little more difficult. I was able to adapt, but I went down that path kicking and screaming. (Figuratively speaking, or I doubt the group I'm gaming with would have let me stay.)

We have dice for a reason. For me, character generation has always been a time where I get my dice rolling out of my system. (For reference: I'm usually relegated to playing the supportive spellcaster, and don't make too many rolls in combat situations.) This is why I have dice and this is why I purchased them. Granted, one of my favorite systems (White Wolf's classic World of Darkness) is a point buy system... but when I play D20, I prefer to roll my stats and let fate step in.

I know I can go on and on about this, and I know that many of my readers have opinions on the subject. I would welcome you to leave comments about which system of character generation you prefer and why.
Posted by John "Zanziber" Rogers at 9:18 AM 1 comment:

More and more I find myself saying (or at least thinking as to not suffer a slight amount of embarrassment) "When I was your age..." towards many of today's gamers.

When I say Dungeons & Dragons, younger gamers are more likely to relate to 3.5 or 4th edition. My first D&D characters were generated using books from a red or blue or blue box... well before Wizards of the Coast got their hands on it.

Of course, gamers who have been around longer than myself also give me a funny look since they cut their collective teeth on a wood-colored or white box. 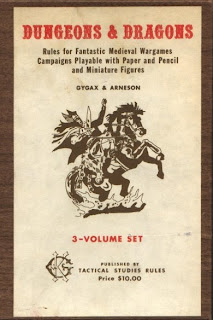 While many things change as we get older, it seems like gamers feel the effects more viscerally than the average person. In my youth I would turn a 3-day weekend into a 72-hour role playing session. These days I'm finding it difficult stay awake past 10pm. Ah, the glory days!

In the mid to late 90's, I started LARPing in The Camarilla. These games would typically run from 7pm to midnight, and (in the spring and summer months) often actually end between 1-2am... after which we would depart to the local 24-hour restaurant for "Afters" until who-knows-when. Back then, I could do all that on a Wednesday or Thursday night, and still be able to catch my ride to work for an 8am start.

When I rejoined The Camarilla (now known as the Mind's Eye Society) in 2011... after a sabbatical that began in 2004... I was invigorated again. It was like taking a Viagra (I would assume), as I was easily able to keep pace until midnight and stay awake for "Afters". That lasted for a couple of months before I began to feel the weight of my years again.

I recall my junior year of high school where I was working on a campaign for the Champions RPG. As I look back on this time, I remember just how immature I could be. The title of the campaign was to be "The Pervert Campaign". I had created an organization, akin to Cobra from G.I. Joe, that was based around using weapons and vehicles of a XXX variety. Phallic imagery and the copious use of breasts were sources of inspiration for the game. The "evil" organizations name was S.P.E.R.M.I.E.S. I don't quite remember what it stood for, but I remember asking a student teach to help come up with it. This campaign never actually ran. In hindsight, I think that may be for the best.

Another look back at my younger days as a gamer allows me to reflect on the fact that I didn't really become responsible until around 2003. During my earlier days, after high school but before 2003, I was rarely employed and earned money from doing various odd jobs. I made use of this "freedom" by playing and running as many games as I could. As much as I appreciated the games and friends during those times, I now find myself lamenting the choices I made to not be more responsible.To illustrate, I didn't get my driver's license until 2009. Had I been a "normal" teenager and got my license when I was 16, I think my life would have turned out much differently.

The term "gamer" has come to incorporate a larger population than just role players. You have to add MMORPGer's, CCGers and video gamers to the mix as well. Where you were once considered an outsider for playing these types of games, now it has become more mainstream thanks to shows like The Big Bang Theory. Sure, they still poke fun at nerds, gamers and geeks, but these terms have become more a badge of honor than a scarlet letter.

I've found that my standard gamer diet has evolved over the years as well. When once cheap pizza, Funyons, Mt Dew and pizza rolls were key "gamer chow", I find that peppers (yellow, red and orange), vegetable trays, Vitamin Water and sliced apples are more my speed now. Sure, I'll occasionally pick-up a Mt Dew or a bag of chips, but it's not as often as in my youth. I even remember trying a Twinkie-Wiener Sandwich once or twice.

As I sit writing this post, I'm thinking about the latest in changes of my gaming habits.

In 2011, I became the coordinator for the Salem domain of The Camarilla (MES). My duties were to make monthly reports, secure sites for Domain events (games and other meetings), track and be liable for Domain's finances, communicate to the Domain information from a Regional or higher level, and help solve out-of-game disputes. It wasn't a horribly hard task, until I started going back to school in 2012. That's when I realized that I didn't have as much time to devote to the position of coordinator. On June 1, 2013, I officially stepped down from my position as Domain Coordinator. To be honest, a great weight has been lifted from my shoulders by not being responsible for the few remaining members of the Domain.

Younger gamers may not realize it now, but they will one day reflect on their lives much as I am doing now. I hope that they can see more good than bad from their experiences. In the end, it's all about our experiences and those we've shared them with. To all you younger gamers, I hope the best for each one of you.


"Weird Al" Yankovic - When I Was Your Age


Special thanx to my friend Evonne for suggesting this topic.
Posted by John "Zanziber" Rogers at 8:57 AM No comments: