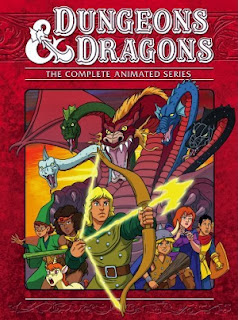 Last month, the Dungeons & Dragons cartoon series turned 30-years old. That means I was 8-years old when I started watching it... and it left an impact. This cartoon helped inspire me to take-up roleplaying. At the time, D&D had a label of "Ages 10+" on it, so I had some time to wait before I could actually play it. (Yes, I thought this was mandatory.)

After reading so many of the articles that were posted when the cartoon hit 30, I was thinking about a special book that came with the DVD boxed set. I'm talking about the Animated Series Handbook for Dungeons & Dragons 3.5 edition. 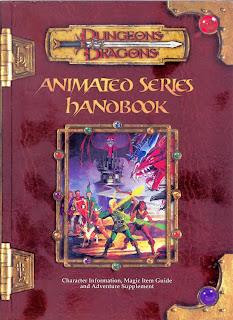 I remember wanting my character to have items like the Energy Bow and the Cloak of Invisibility. This book has all the characters stated-out including their magic items. There are even stats for Uni, Venger and Shadow Demon. This sole book made purchasing the DVD set worth while.

This is also when I began to adore the mother of the chromatic dragons - Tiamat. 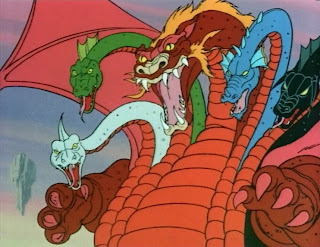 This cartoon series also inspired me to run a D&D game where the players were actually their characters in the D&D world... including all their knowledge of the game system. It worked well for as long as it ran. I think, some day, I'd like to revisit that idea and run a longer campaign. Something to consider for the future.
Posted by John "Zanziber" Rogers at 8:30 AM