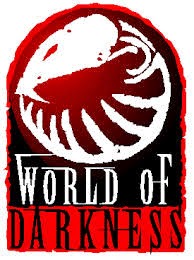 In 1991, Mark Rein-Hagen created the first in what was to become a series of games based in a single world. This was the inception of Vampire: The Masquerade. From there came Werewolf: The Apocalypse, Mage: The Ascension, Wraith: The Oblivion and Changeling: The Dreaming. These became the core for the World of Darkness setting. Some ancillary games followed to increase the battery of concepts a persona could play, and a storyteller could run. These games were Kindred of the East, Mummy: The Resurrection, Hunter: The Reckoning, Demon: The Fallen as well as a selection of games setting in various times in history ranging from the Dark Ages to World War 1.

Character creation is a fairly simple point-buy method for dots in your chosen attribute/ability/power. Each dot represents a d10 that you use in order to determine the outcome of your actions. For example, a basic hand-to-hand attack would be a roll of your Dexterity attribute  plus your Brawl talent with a difficulty determined by the storyteller. For this example, let's say your Dexterity = 3 dots and your Brawl = 2 dots. You roll 5d10 and everything that matches or exceeds the set difficulty is a success.

In the World of Darkness games, you don't level-up as you do in games like Dungeons & Dragons, you actually spend the experience points you receive to improve your character. This helps players to develop their characters with a more personal touch.

If you want your character equipped with weapons, the selection available in the core books is extremely limited. In 1997, White Wolf published World of Darkness: Combat. This book not only included an extensive list of weapons and ammunition, but also gave optional rules to customize combat. These optional rules made combat more difficult, but I recommend you look for yourself. This book does include rules for specialized combat system for a few of the games, which also make the book worth getting and keeping. I'll have more information on that when I write my review for the actual book.

Each subsequent year of publication had a different theme. This brought about new sets of character types, but more importantly it dictated the focus of all the sourcebooks published that year. For instance, Vampire and Werewolf produced sourcebooks in the Year of the Lotus cycle, concerning a variety of Asian themed creatures and expansions.


In late 2003, White Wolf Publishing announced it would stop publishing new books for the line, bringing the published history of the setting to an end with a series called The Time of Judgment. This event is described from different supernatural perspectives in four sourcebooks: Gehenna (for Vampire: The Masquerade); Apocalypse (for Werewolf: The Apocalypse); Ascension (for Mage: The Ascension); and Time of Judgement (covering the rest of White Wolf's less-established product lines: Demon: The Fallen, Changeling: The Dreaming, Kindred of the East, Mummy: The Resurrection and Hunter: the Reckoning).

The publishers stated that in doing so, they followed up on a promise that has existed in the World of Darkness since the first edition of Vampire, with the concept of Gehenna, and in Werewolf, with the Apocalypse, as well as some elements of some of the published material that pertain to 'end of the world' themes in other games.

In 2011 a 20th Anniversary Edition of Vampire: The Masquerade was released, also called V20, and a series of further books for the cWoD were announced. Those books include conversion rules between some cWoD games and their nWoD counterparts, as well as material that was planned but not published before the End of the cWoD, as well as additional material for V20 and a 20th Anniversary book based on Werewolf: The Apocalypse.

For V20, as well as the V20 Companion and the 20th Anniversary Werewolf: The Apocalypse White Wolf Publishing used an Open Development approach, where readers and gamers could give feedback to the authors. At GenCon 2012 it was announced that Onyx Path Publishing is a new company by White Wolf Creative Director Richard Thomas, that will produce material to the new and classic World of Darkness as licensee. In November 2012 it was announced by Onyx Path Publishing that due to the resounding success of the W20 Kickstarter, which reached over 400% of its target funds goal, a 20th Anniversary Mage: The Ascension would be launched for 2013.

I've been playing and collecting the World of Darkness book since around 1994. Other than the older edition core books and others that have been revised through the editions, I nearly have a complete collection. I look forward to posting reviews of each book in my collection, and I hope you enjoy reading them.

The World of Darkness is an easy system to learn. The more complicated parts are when you deal with the individual powers that each game brings to the table. (i.e. Vampires have disciplines. Werewolves have gifts. Etc.)

There are a couple of holes in the system that can be easily fixed by a competent storyteller. Because the system has been around for over 20 years, there are several books that compile a complete collection. You can easily play a simple game with just a core book, but the various sourcebooks add to the flavor and sunniness of each setting. You don't need every book to create a good game.
Posted by John "Zanziber" Rogers at 10:00 AM No comments: