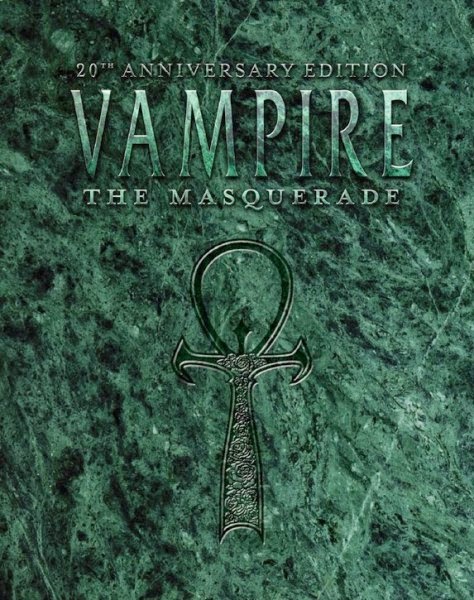 When White Wolf ended the Classic World of Darkness line in 2004 with the Time of Judgment event (Gehenna, et. al.) and introduced the New World of Darkness, I was upset.  I felt betrayed because my favorite game system and setting was gone and not returning.  I nerd-raged when I saw how different the setting of the New World of Darkness was.  I hated how they had removed the wonderful and complex back story.  I didn’t buy the new books, and as much as I loved playing Vampire the Masquerade, I moved on to other systems.  I played a lot more Dungeons and Dragons, Star Wars D20, and Legend of the Five Rings, but in the back of my mind, I was always thinking about the World of Darkness and especially Vampire the Masquerade.

When the 20th Anniversary Edition of Vampire the Masquerade was announced, I had already gotten back into Vampire the Masquerade, running the Revised Edition for a group of gamers who had never played VtM.  I was so excited to hear that my favorite game was coming back, and when the Onyx Path announced their plans to begin publishing the Classic World of Darkness game lines (along with New World of Darkness, Exalted, and Trinity), I felt like a Djinni had granted a wish!  Unfortunately, I wasn’t able to order a copy of the deluxe edition or to attend the Grand Masquerade in New Orleans, but I couldn’t have been happier.  I ordered a copy of V20 as soon as I could afford it from DriveThruRPG and the book I received was beautiful.

V20 is a nearly exhaustive single volume that displays all of the greatness that was Vampire the Masquerade back in the 1990s when I started role playing, and it has also lead to a resurrection of White Wolf products through Onyx Path Publishing and CCP (makers of Eve Online).  However, V20 is not a perfect product.  Because it was conceived as a single book devoted to fans of the Classic World of Darkness and Vampire the Masquerade, several issues exist with the presentation of the material.

The first thing I noticed when opening the book was the artwork, a mixture of black & white and color.  The artwork chosen for V20 is a mixture of the old and the new, bringing together the nostalgia of old sessions sitting with friends I haven’t talked to in a decade and the desire to build new chronicles and share them with new friends and even strangers.  Pulling from the vast amounts of artwork from previous Vampire the Masquerade books, the authors have chosen some gorgeous images that capture the essence of the setting, but they have also carefully avoided artwork that was too ‘90s.  The new color artwork is breathtaking, especially the images of stereotypical members of each clan that grace the pages opposite the start of a new chapter.  The artwork is vivid and beautiful and perfectly reflects the tone and atmosphere of Vampire the Masquerade.

Every major clan is included in V20 along with their bloodlines and disciplines.  The amount of options presented can be overwhelming, and some of these clans and bloodlines should have been left out.  While I understand the authors’ need to include an exhaustive list of every possible clan or bloodline, along with their disciplines, I feel that perhaps they went too far.  Including clans from Dark Ages Vampire (such as the Cappadocians and Lamia) or minor bloodlines (such as the Ahrimanes) or even the especially strange Children of Osiris, was unnecessary except for the sake of completion.  I have no particular dislike of any of those clans or bloodlines but I believe the space spent on these could have been better used.  More on that later.

Aside from some minor changes and tweaks, the core mechanics are much the same as they were in Second Edition and Revised.  The most important change to the system is to the Abilities section.  Several new skills have been added, such as Technology (for using electronics that are not computers), Larcey (for picking non electronic locks) and Awareness (for identifying supernatural phenomena).  Dodge has been incorporated into Athletics.  Secondary skills have been completely removed, simplifying character creation, although some hobby abilities remain but only to round out character concepts.  The focus however is on the primary Abilities.  Also, the rules for multiple actions have been tweaked slightly and much improved by simplifying it.  I was never a fan of the way dice pools were split in Revised; in V20 you simply decide on the number of actions, then determine the smallest dice pool, and finally split the smallest dice pool amongst those actions.  Backgrounds have gotten a needed boost through a mechanic that allows players to pool their background points thus binding a coterie together and letting them invest into a shared resource pool.

Certain disciplines have been updated as well.  The biggest changes have been to Celerity and Potence.  However, the changes balance these powers effectively giving both of them a passive ability as well as an activated ability.  Now the player has the option to choose with Celerity whether to roll more dice on attack or spend blood for extra actions. (The amount of blood spent for Celerity can exceed the generational maximum.)  Potence has a similar change.  Other Disciplines have been rebalanced.  The first level of Presence, Awe, now requires the expenditure of a blood point to activate.  Disciplines for all the major clans are present up to their ninth level along with some options for levels six through nine for some disciplines.
Setites are becoming my favorite clan

The combat system retains the quirks of the older editions as well as the simplicity that I always loved.  Although it is possible to use grid maps and plot every movement during a battle, that level of detail is unnecessary.  The focus is on fast and loose combat that doesn’t require anything more than the players’ imaginations and a few dice rolls.  The initiative system did receive a minor change.  Now prior to each round of combat the players re-roll initiative.  This can slow down combat rounds slightly but it can be easily changed without affecting the system to rolling initiative once per combat.

Overall, V20 preserves the essence of the Classic World of Darkness while updating it for the future.  However, I do have one major gripe with this book.  While I understand that this book was targeted at existing fans of the system as an anniversary edition, the lack of an in depth history of Kindred is a big problem especially with the inclusion of bloodlines like the Ahrimanes and Children of Osiris (are they a bloodline or a sect?) or clans exclusive to the Dark Ages setting.  However, as a book to introduce new players to Vampire the Masquerade, this book fails to deliver needed back story to put these clans and especially the bloodlines into perspective.  I understand that V20 is supposed to be metaplot neutral, meaning that events such as Gehenna or the Gangrel leaving the Camarilla are left to individual storytellers, but the lack of explanation in V20 means that new players lack knowledge that could have been included in this tome by cutting extraneous clans like the Ahrimanes.  The history of the Classic World of Darkness setting has always been complex and often contradictory, but its exclusion from this book is one of two glaring errors on the part of the authors.  The other error is the omission of the Caitiff which was added in the V20 Companion that was released shortly thereafter.

The 20th Anniversary Edition of Vampire the Masquerade marks the welcomed rebirth of the Classic World of Darkness and Vampire the Masquerade.  Vampire has long been missed by its fans, and I look forward to introducing more new players to this wonderful game.  I am looking forward to the next Kickstarter for The Onyx Path.  Werewolf’s 20th Anniversary Edition has just been made available at DriveThruRPG and Mage is next up along with plenty of other books representing the rebirth of the Classic World of Darkness.  If you are fan of the World of Darkness this book is a must buy.  However, if you are a new player, you’ll need to do some reading on the history and mythology of the World of Darkness or find a veteran to explain some of the minutiae of lore founded in these pages. In the future I hope that The Onyx Path, CCP and White Wolf publishing publish a book that gives more background information on this very deep setting.
Posted by John "Zanziber" Rogers at 10:45 AM No comments: