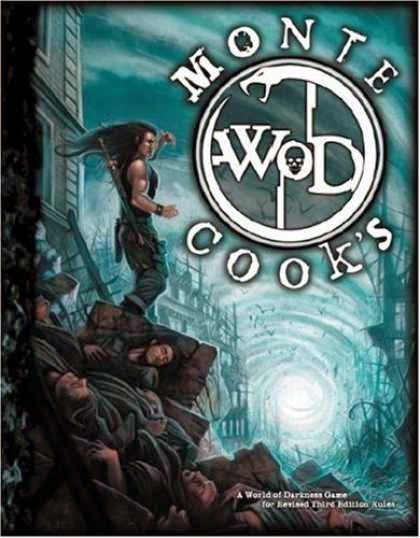 There’s something about Monte Cook that, love him or hate him, is lodged in the collective subconscious of the gaming world: a many-headed hydra that, cut one head away and two more take its place.  This is a positive thing for a writer, especially one who has created so many settings books and rule sets over the last couple of decades.

What really does it for me is that, for some reason there is this one campaign that I have always wanted to run: it is a mixed game using a half-dozen books that I’ve got that are all d20, and involve a mix between d20 Future, d20 Apocalypse, Monte Cook’s Call of Cthulhu d20 and Monte Cook’s World of Darkness d20.  And some other stuff, like Pathfinder rules for fantasy heroes (swords would be a big part of this, and magical items) and monster compendiums and such.  I’m thinking a sort of Buffy the Vampire slayer/Angel series feel, mixed with some World of Darkness-isms, plus Conan and horrible things from beyond time and space, plus cyborgs and mutants and androids and aliens.  it makes sense in my head.

The structure of the game is based on the World of Darkness d20 book, but for some reason it’s just not that big a product in the gaming subconscious: really only I seem to know about it, and the forum on Monte’s website where questions can be posted about the game has tumble weed and dusty footprints from the last time I went in there.  Personally I think this perfectly good game needs a second chance, so here goes a review:

Monte Cook somehow convinced White Wolf to let him do a conversion of the World of Darkness to d20.  This means rules for Vampires, Werewolves, Demons and Mages from those games for use in d20.  Warning: the setting for the book is absolutely different from the classic Vampire games White Wolf put out, with vampires and werewolves as spirits of the dead who only just showed up (let’s say last year), so no ancient vampires in torpor or Camarilla or anything.  Regardless, the rules work whether you use that continuity or a classic version of vampires and werewolves, so if you don’t like the setting you can still use the rules.  This is a huge plus.

The book is divided between fiction chapters and rules chapters, and then two Settings to run games in (Chicago and a mystical Ground Zero combat zone).  I like how White Wolf does that in some cases, but the issue for me is that the fiction and setting material are so packed in there it makes the book really big.  We’re talking Pathfinder Core Book big, and most of it is fluff (ie: not rules material or monster stat blocks), and that’s a big deal.  If it were me, I’d put the fiction on a website and release the rules as a slim volume, or a thick volume with more material in it.  In fact, if anyone is listening, a second printing or version of such as rules volume would be welcome in that form.

Character creation is easy:  you have the same d20 ability scores.  Then you pick character focus, which gives you your class skills: Might (strong types), intellect (book worms), Spirit (social, sort of), and Stealth (dexterity), and get an ability score boost.  You can switch up your Focus every level, meaning you get a different list of skills to choose from and the ability bonus switches.  It’s sort of like changing your personality or style, and changing the skills you’re focused on.

Then you pick a Character Type: Vampire, Werewolf, Mage, Demon, and Awakened (human with skills, sort of like the Hunter game).  Ability score boost here, and a list of special abilities to choose from.  They all seem to have some sort of pool of points to spend when activating powers (ie: blood/vitae, mana, essence, and anima).  There are also various sub-breeds, like Tempter demons or Scourge demons, the standard vampire groups (nosferatu, ventrue, etc.), different kinds of mages, etc.  These grant minor bonuses at different levels.

The choice of what “race” you pick can’t be changed, nor can you pick up a level in more than one “race”.  This doesn’t include character classes from other games, like d20 modern class levels, or levels in Pathfinder classes (save Wizard or other casters).  This isn’t mentioned in the game, just left up to the GM.  In fact, one hole in the product is that there isn’t a set of rules for non-supernaturals.  I don’t have even a stat block for soldiers who might shoot at PCs breaking into an army base.  Considering the setting books have these characters mentioned, it is an issue.  As well, using the Vampire and Werewolf classes for characters who are turned after getting infected, not in there.  There should be a difference between a soccar mom and an elite assassin, in terms of hit dice.

Basically this is left to the GM, and in my mind this is a good thing, value wise:  I don’t need yet another version of d20 Modern or, heck, the d20 CoC rules Monte Cook wrote.  This isn’t a gateway RPG product, it’s something people are likely to get after they a) have played D&D or b) have played World of Darkness and want to try the d20 system.  The probability is that SOMEONE they know has a book that can fill in these blanks, and if it’s them they may even have a number of these books.  (case in point: me!  and likely you, oh reader).

After that it’s the Skills section (basic modern), then Feats and Abilities.  The Feats are your usual d20 feats, but the Abilities are specific to this game’s “classes” (Types).  They’re special abilities the character gets for being what they are.  Think static abilities, some of which are powered by Mana/vitae/essence, etc., while others are not.  Your Demon can create a set of claws, walk through walls, or gain a special supernatural attack.   Your Mage gains bonuses to Save DCs against a type of creature, gets a familiar, or some regular spell-like ability.  Your Vampire uses these for all their vampire disciplines: Auspex, Obfuscate, Celerity, and other familiar names from the White Wolf games are the groups of abilities; they can run like the wind, hide in shadows, and other special abilities WoD vampires need.  Werewolves have various Rage-enhancing and shape-changing abilities.

Magic comes next, which is the Mage section.  The system here is pretty neat, especially considering Monte Cook as a designer of spells (Books of Eldritch Might, CoCd20, Arcana Evolved, etc.).  The point is Mages get Mana they use to build spells.  we’re talking here things like Range, Damage Dice, Duration, the real nuts and bolts.  You want a 100ft range spell?  you spend X Mana.  Tally up all the costs of the spell and you get how many Mana it takes to cast it.  This is a telling feature, as I think it’s Monte’s design notes for how he balances spells he designs: the formula, or near to it, for how he invents spells and determines what level they should be.

As someone who designs spells myself, this is a great lesson: you want a spell?  you make it up yourself!  It’s hard enough writing a whole book, or designing the general structure of a game, but then having to come up with a million spells?  And how to decide what level they should be?  Bam, a points system.  This really uncovers the design process for me, similar to how Green Ronin’s Mutants & Masterminds and other such games really show how the d20 system works.

The only issue I have here is that Mages can do literally anything.  ANYTHING!!!  As a GM who understands what it’s like to GM, if I were playing this I’d be respectful to not stressing the GM out.  It’s a responsibility to be sure.  Still, many would say there need to be some limitations: one forum discussion suggested making Mana recharge only during sleep/rest, instead of every few minutes.  I might add needing a focus item, but instead of a harmless holy symbol/staff it should be something more fun (such as, say… the Necronomicon, or other sentient items with their own agendas that must. be. controlled!).

The rest of the book is more general stuff: equipment, GM advice, and then two settings for the game (or parts of the greater setting).

The gist of it is that there’s a force out there, sort of cosmic evil, and it caused a magical nuke explosion in Minnesota, now ground zero.  There are now Supernaturals all over the place: dead people or animal spirits inhabiting people, demons, and some people now have magic.  Add to that that a good portion of them work for the “big bad” and are helping bring about the end of the world.  How?  The consensus seems to be that there are special people (the Awakened class) who for some reason have to all die.  The hunt is on.  In Chicago it’s all in the shadows.  In Minnesota the army has quarantined the area as best they can, meaning ground zero is a supernatural war zone.  Elsewhere there are strange occurrences (giant mushrooms, haunted houses, etc.) and the world is going to heck.  Fun to read and a lot of adventure hooks in there.  a.  lot.

I like the setting stuff, it’s entertaining, but I don’t know if I want to lug it around with me when I really just want the crunch info.  It’s a heavy book, like University Textbook heavy.  Again, I’m begging you: if you want to reprint this book (or, ho-hum, hire me to make a second edition!), make it slimmer and crunchier.  I would love to write stories in the setting, though, it just makes me want  to do that.  (or, like, blog that I do)

The rules for other creatures, especially NPC humans, are pretty light. Luckily they work basically the way d20 Modern and other games work, so you could just port stuff over. That adds a lot of value if you’re into this game: can we say Vampire Dark Ages d20?

I can’t say enough how much I like this game, especially if linked to other games.  The magic system could replace standard Wizards in D&D, and the Vampires and Werewolves would make great levels for PC vampires and werewolves instead of the generic templates that are either too powerful (Vampires) or too weak (werewolves).  There is conversion needed (ie: if you’re using Pathfinder as a base game, or d20 Future), but it’s a great resource.
Posted by John "Zanziber" Rogers at 12:57 PM 1 comment: