Expedition to the Ruins of Greyhawk 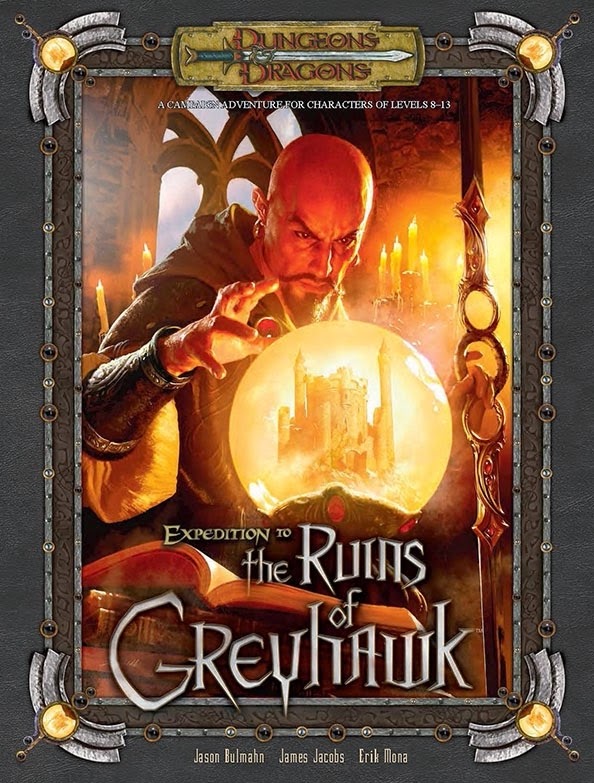 Title: Expedition to the Ruins of Greyhawk

Expedition to the Ruins of Greyhawk was one of the final products WotC published for 3.5E D&D before the 4E announcement. It is part of the “Expedition to…” series of hardback adventures that tried to recapture the magic of some of earlier editions’ greatest hits.

The adventure takes characters from 8th to 13th level. (One of my minor annoyances is that there are no explicit guidelines about how the characters should be advancing in power through the adventure, though – for such a long adventure, that information would be very useful.)

The hardback book is 224 pages long, with 2 pages of advertisements, a seven-page appendix of new creatures (including the aurumvorax and cataboligne demon) and magic items. Production values are typical of WotC during 3.5E nice heavy, glossy full-color pages, generous illustrations, and lots of maps.

The adventure is written in the “Delve” format typical of WotC’s later 3.5E (and 4E) adventures, in which combat encounters each get a full page or two page spread, complete with a map, detailed tactics, and careful explanation of terrain. Another advantage is that it incorporates full statblocks for all the creatures – an easy reference, and allowing the designers to use the whole 3.5E catalog without assuming that the GM actually owns everything!

This makes combats easy to run, but it has a couple of serious disadvantages. Most importantly, the story part of the room description is separate from the combat, which makes it difficult to read the adventure and interrupts the narrative flow of the game. Second, it makes it more difficult for a GM to let the adventure “flow” between encounter areas and rooms, since each combat is specifically designed to work within the confines of its map.

On balance, I find the delve format to be somewhat annoying, but I do see its usefulness in combat situations.

The adventure opens on the road to Greyhawk, when the PCs encounter a group of orc raiders as they attack a caravan. There they rescue an innkeeper and receive their first hook to Castle Greyhawk: recovering the innkeeper’s magic sword, stolen by orcs who had earlier escaped.

This is not exactly a complicated setup, but it sets the hook and gives the PCs a base of operations in Greyhawk – the Green Dragon Inn, well-detailed in the first chapter. That chapter also gives an overview of the city itself, as well as details on a number of important locations for adventurers. While clearly not at nearly the level of detail as previous products (like the excellent The City of Greyhawk), this is a nice, compact treatment that makes the city useful for an adventure. Moreover, sprinkled throughout are a number of “side quests” that provide extra motivation for exploring Castle Greyhawk – from recovering mushrooms to getting to the root of a major mystery (the desecration of the High Cleric Riggby’s body). These side quests add some “sandbox” elements to what is otherwise a pretty linear adventure.

The escaped raiders’ trail leads to Castle Greyhawk, an immense and mysterious complex built by one of Greyhawk’s great wizards, Zagyg the Mad Archmage – who has since then risen to demigod status. It is one of the most important dungeons in Greyhawk and in real-life D&D history, as it was the setting of Gary Gygax’s original campaign.

The Castle has appeared in print twice by TSR/WotC before (see this geeklist; most importantly in the oft-derided but in my opinion hilarious WG7: Castle Greyhawk, and in the very odd adventure WGR1: Greyhawk Ruins, which included the briefest of descriptions of rooms in the enormous complex, and nearly no plot), but neither bears any relation to Gygax’s original. He was in the process of publishing his version when he passed away; unfortunately, it thus looks to remain unfinished. The authors, all known as huge Greyhawk fans, here set out to pay homage to Gygax’s original vision and to restore the Castle as a serious and important dungeon.

The Castle consists of some above-ground ruins and three towers. The meat of this adventure is a series of dungeon crawls through the complex underneath each tower. The PCs are assumed to have self-imposed missions within each one (but suggested by the side quests), so the adventure does not attempt to describe the entire complex. Instead, it provides details on the relevant levels and some tools (a few encounters and some tables) on expanding if the players wander off-course. It does provide a fair amount of detail on the history of the Castle, so this can easily become a location of continuing importance in a campaign.

The adventure begins as a simple pursuit of the innkeeper’s magic sword, the trail of which takes them to the Tower of War at Castle Greyhawk. But the PCs quickly realize that the raiders were only a part of a larger force in the service of Iuz gathered within the Tower (who arrived through the Underdark). The PCs confront the army’s general, but after the fight they learn that the true leader, a vain wizard named Vayne, hides in a different – currently inaccessible – dungeon, below the Tower of Magic. Fortunately, they at least recover the magic sword, lending some sense of progress.

One of the nice things about the adventure is the number of side quests sprinkled throughout, which continue to pop up even inside the dungeon. I particularly like the rivalry between the evil gods that plays out; these really help to keep things interesting.

The PCs’ next task is to find a way into the Tower of Magic. Fortunately, the Greyhawk Thieves’ Guild has a plan, and with their help the PCs can break into the Guild of Wizardry to steal the key. This section is a little contrived, but a couple of tough but interesting encounters (a beholder!) and a meeting with Mordenkainen – who tasks them with the mission of rescuing his former adventuring companion Robilar, who had inadvertently traded places with an evil twin (it’s actually not quite as silly as that sounds) – makes up for it. This gives the PCs another plot thread to chase, and the Thieves’ Guild’s price for helping adds yet another.

This section also contains a few side quests within the city, which provide a nice change of pace from the more-or-less straight dungeon crawl of the rest of the campaign.

Finally able to return and enter the Tower of Magic, the PCs confront more of Iuz’s troops, soon learning of an impending invasion of Greyhawk. They bounce back and forth between the Towers of Magic and War, confronting the gathering army and Vayne. Along the way there are some memorable encounters with a mind flayer rogue and an imprisoned half fiend (though PCs must be fairly naïve to fall for her). This is a pretty straight dungeon crawl with some entertaining scenery.

It ends with a bang, though: Iuz teleports into the dungeon upon Vayne’s death and nearly kills the PCs. Fortunately for them, one of Vayne’s projects – a simulacrum of the legendary Iggwilv (Iuz’s mother) – has plots of her own, and she uses a legendary artifact called the godtrap to confine Iuz before he can kill the PCs. (The presence of such a powerful item actually makes sense, since it is what Zagig the archmage used become Zagyg the demigod long before). Now the plot twists again, and Iggwilv’s simulacrum becomes the BBEG.

This is the weakest part of the plot – why should the PCs bother to stop a mid-level wizard who has trapped one of Greyhawk’s greatest evil creatures? It wasn’t clear to me after reading it, nor after playing it, except that it is clearly the Right Thing To Do because she is up to No Good. So we went along with it, especially because the side quests continue pushing you forward. But it’s not as compelling an ending as stopping Iuz’ invasion!

In any case, this takes the PCs into the third and final of the Castle’s dungeons, below the Tower of Zagig. This section clearly puts the PCs in Zagig’s territory, with lots of weird wizardly rooms and traps, plus quite a few well-done encounters (I particularly like the juggernaut.) The PCs will eventually work their way into Zagig’s Ziggurat, which contains numerous clues to the mad archmage’s mind and, more directly important to this adventure, the sundered pieces of the godtrap key that the PCs need in order to stop the simulacrum.

This is a fun part of the adventure for a couple of reasons. First, the pieces are actually hidden on demiplanes accessible from the dungeon. This was a key part of Gygax’s campaign, and the demiplanes are a great change of pace and great for nostalgia value – two refer to the early adventures WG6: Isle of the Ape, EX1: Dungeonland/EX2: The Land Beyond the Magic Mirror. Second, their guardians are evil twins of Zagig’s adventuring crew – whose real names (Heward, Murlynd, etc.) will be familiar to long-time D&D players.

With these pieces in hand, the PCs can finally confront the simulacrum in the godtrap itself. Unfortunately, the climax is far from the best encounter in the book. While challenging, the key terrain in the room is very hard for the PCs to use unless they are extremely well-prepared, so it ends up being not very dynamic. But most importantly, only one PC per round can enter the chamber, no matter what! While this helps extend the combat for dramatic purposes, it means that most of the group will be sitting around twiddling their thumbs for a good chunk of the encounter! This seems like very poor design to me, in an otherwise well-done book.

All in all, I think this is one of the better WotC adventures of the 3.5E era. It provides a reasonably fleshed out setting – the city of Greyhawk – with enough small plot hooks to keep PCs happy (these side quests are really great). It has a lot of very interesting encounters. The plot is convoluted but revealed in bite-sized chunks, so the way forward is always clear. There are some nice changes of pace outside the dungeon (in the City and in hidden demiplanes). And there’s an awful lot of new Greyhawk lore for fans of the setting.

Nevertheless, it’s not perfect: the final section needs better motivation, the delve format gets on my nerves, those without an existing connection to Greyhawk may find the many links to Greyhawk canon grating, and the final encounter’s design is very disappointing.

Still, if you are looking for a solid dungeon crawl for mid/high-level 3.5E or Pathfinder characters, I definitely recommend this one!
Posted by John "Zanziber" Rogers at 7:15 AM