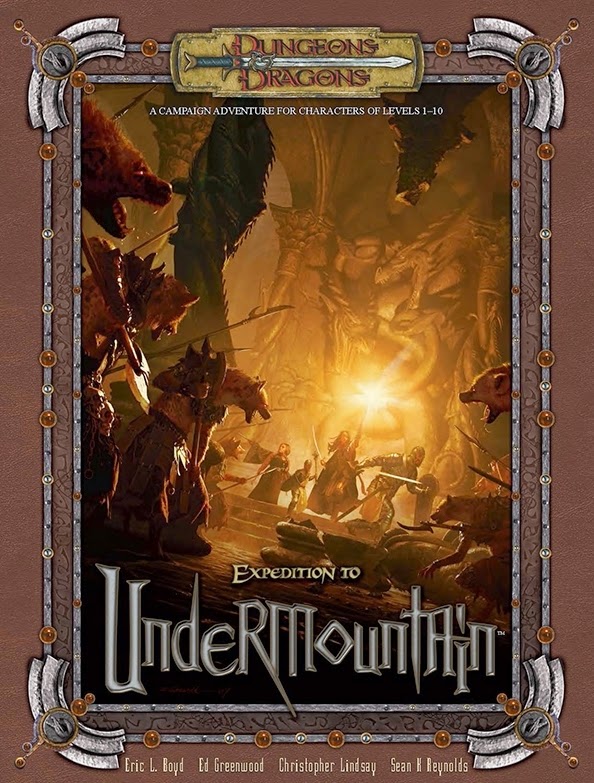 The cover is the same material and finish as Expedition to the Demonweb Pits, but is a good deal more red than the greyish brown of that book. Still, the book feels like it's not going to be sliding around on the table when you use it, and that's really the important part.

The general format is unchanged, though there's one major difference in the table of contents. Instead of laying everything out twice, which there apparently wasn't room for, the single-encounter expansions are relegated to being referenced from the appropriate encounter entry. They do still manage to put each of them on its own page, though, and none of them starts the first of two pages on an odd page, which is still damn handy.

They haven't actually cut out any of the Forgotten Realms flavor text, except for the name of the city, Waterdeep. Waterdeep is referenced and described somewhat in a 1/3 page sidebar, but they excised pretty much every world-specific thing they can, presumably to get more people to buy it. Regardless, it's not as though Undermountain is exactly dripping with Forgotten Realms flavor in the first place. It's pretty much now the classic "There's an insane wizard, and he's got a gigantic dungeon under a huge mountain, let's go raid it!" adventure of D&D.

There's a quick, two page or so rundown of services available in the city, from who, though no major NPC write-ups are given, just names, and sometimes not even full names. Khelben Arunsun, for example, isn't mentioned at all, though Blackstaff Tower is, as THE place to go for effective, but extremely expensive arcane aid.

The opening premise of the adventure is pretty simple. One day during midday or so, gigantic screaming Halaster faces appear in the city, screaming in despair, along with visions of ruin and destruction and a distinct feeling that the shit is about to hit the fan. That night, a whole bunch of adventurers, of all levels, are hit with visions summoning them to Undermountain to fix something that's gone very, VERY wrong.

Chapter one opens with some important advice and tips for the DM, including a third of a page or so on creating the illusion of more detail than you have, something that more DMs could stand to read, and how to railroad PCs temporarily until you flesh out certain areas, which ideally shouldn't be done at all. Also given page time is random encounters, which Undermountain doesn't exactly use extensively anymore, but ARE present, because it makes sense. Undermountain has always been largely random, and while this one's less so than the rest, if you remove the randomness entirely, it's really not Undermountain anymore.

A couple pages are devoted to factions in Undermountain and Skullport, though there aren't many, and they're mostly in Skullport. There's nothing really remarkable, here, and for those familiar with Undermountain, it'll all be pretty old news.

The overall map of Undermountain makes it look less impressive than it is. It almost resembles a map for a Metroid area, though there are fewer vertical areas than there really should be, and no major slopes.

If there's one major complaint I have about this book, it's that the maps, being confined to the 8.5x11 splat size, cannot possibly do justice to the size of Undermountain. The first level map was, in the original box set, a full poster, eight times the size of the one we get here, and it shows. The map is very twisty, very turny, and it is, as far as I can tell, totally intact, including the homage to adventure module B1, In Search of the Unknown. Yes, faithful readers, the entire first level of the keep, in most of its screwed up geometric glory, is present on the first real dungeon level of Undermountain. To check for yourself, you can open the module itself, and go to page 19 of Expedition to Undermountain, look halfway up the right side of the page, and look for the cross-shaped room and the < corridor right below it.

Even the Lost Levels from the Undermountain II box set are reproduced here, including the Wyllowwood, in all its underground forest with fake sky glory.

Honestly, the maps are so absurdly small in places that WotC should consider selling D&D branded magnifying glasses to go with this thing, or at least giving a disc of printable large scale maps.

The random encounters section is actually depressingly small, leaving it to the DM to add more variety if he wants it, though I approve of random wandering Crawling Claw Swarms. Splinterwaifs are pretty pathetic, honestly, but if the DM overuses their "special" hook, the game's going to get "special" real quick.

Unfortunately, the adventure conclusion is a whole lot of a letdown. I'm not going to spoil it, but it's definitely not really a conclusion in any sense except that it marks the end of the module.

The "new" mechanics section is really, REALLY short, as almost everything used in the mod is prefab. There's a new legacy item valid only for dwarves, and for dwarven wizards, it's absolutely amazing. Too bad the Least Legacy is absurdly difficult for a PC to complete. Two Augment Crystals (from MIC) are included, but they're not new. For some ungodly reason, they saw fit to grant an eighth of a page or so to a named greatsword that has nothing unusual about it other than having a name related to its function, another entry for an alternate-form headband of intellect +2, and a new variety of potions that aren't liquid, use Craft Wondrous Item, and are limited to a really tiny spell list, most of which sucks. On the up side, apparently WotC has determined that the Brew Potion feat is worth less than 5000 GP, since there's an item that grants a better form of it for 5 grand. Not only do you get brew potion, if you already have it, you can brew in half the time, you can convert scrolls directly to potions for the upgrade cost, and you can buy a half-cost potion of cure light wounds once per day from it, for no XP cost. Sounds good to me, potions are terrible.

Five spells are detailed in the back, only two of which are new, and have been a LONG time in coming. Specifically, Halaster's Scrying Cage and Halaster's Teleport Cage are both printed, on page 219. For a not so very expensive cost, you too can teleport-proof AND scry-proof your entire stronghold. This is something villains have needed for a long time, so you can expect these spells to show up in the hands of a conscientious DM near you.

New monsters, there are only two. The second is a Myconid, which nobody actually likes. The other, though, is a swarm of Eyeball Beholderkin, which are just the cutest li'l abberations ever. The thought of hundreds of the cute little buggers working in perfect hive-mind concert makes me giddy like a schoolgirl. It's pretty obvious why these things are rated at CR 4. They can easily slaughter a party of level 1 or 2 characters, but as soon as you're level 5, you're practically immune to everything but their crappy damage, and one good ireball really ruins their day.
Posted by John "Zanziber" Rogers at 7:00 AM No comments: